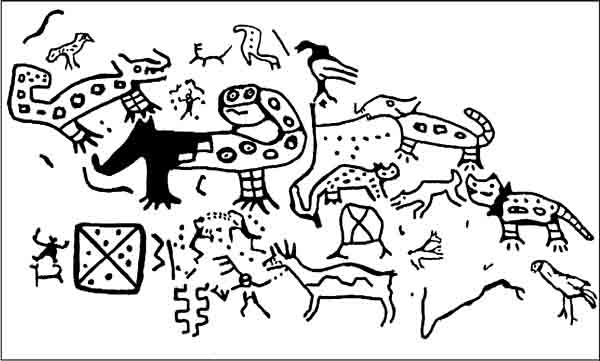 The theory of this very widespread approach consists of two parts. First, the observer attempts to determine the objects or activities depicted in the art in question, and then it is endeavoured to relate the content of this ‘identified’ iconography to supposedly dated archaeological or other time-related informa-tion. The most common applications of this method are the attempts to identify animal species, weapons or other objects supposedly depicted, or to identify ways of life observers believe they can discern in the art. Animal species may then be correlated with palaeozoological or ecological dating information, other objects (boats, ploughs, daggers, swords, halberds, rifles and so forth) with dated archaeological finds or historical documentation, supposed scenes of hunting with a hunting-foraging way of life, and supposed ceremonial depictions with archaeologically inferred practices.

This approach can produce useful supplementary information where the iconography in question is particularly detailed, but it has been widely over-used and misused. Most rock art of the world is not adequately detailed, and many interpreters of rock art seem to be blissfully unaware that there is no a priori reason to assume that the producers of the rock art shared the observer’s cognitive strategies of locating iconicity in graphic production. On the contrary, we can safely assume that graphic conventions of the distant past differed more from those of modern Westerners than, say, the conventions of contemporary indigenous artists in many parts of the world. We know from the only blind test ever undertaken that a Western observer was entirely incapable of correctly identifying animal species in a non-Western rock art corpus. Macintosh (1977) demonstrated that he, a professional anatomist, misidentified 90% of the zoomorphs in Beswick Cave, a major rock painting gallery in northern Australia. This suggests that most identifications of animal species could be regarded doubtful.

To make matters worse for this approach, our knowledge of the past distribution and appearance of animal species is quite inadequate. Distribution patterns available to us, spatially and temporally, are not of animal species, but of the spatial and chronological distribution of the remains of these species. The past distribution pattern of a live species may differ very significantly from that of its palaeontological remains, as a result of taphonomic processes. To illustrate with an example: remains of Europe’s cave bear have been found almost exclusively in limestone caves, which reflects neither endemism nor true geographical distribution, it is simply the result of a massive taphonomic bias (Bednarik 1994a).

But there are still other reasons why a zoomorphic iconography might prompt misleading deductions. For instance, the depiction of an extinct animal may have been prompted by its remains, such as a frozen carcass. Animal depictions may be based on iconic hallucinations (Figure 1 above), and it is perfectly possible to draw a picture of an animal not existing in one’s physical world (narcotics such as harmaline and ibogane induce visions of large cats or snakes even in humans who have no concept of such real animals; Bednarik 1994b). It is perfectly possible that an animal was depicted that had never been seen by the members of a community, but by a traveller, or from descriptions. Even entirely fantastic animals may be, and commonly are, depicted in rock art, so it would be hasty to assume that all rock art imagery is necessarily a reliable reflection of the artist’s actual as against perceived physical environment. It would be just as logical to assume that unusual, exotic motifs are often depicted in art traditions, they are not necessarily faithful reflections of everyday domestic life. To appreciate the point one only needs to consider: does the religious art of any major faith typically depict domestic scenes? Most of it consists of unusual or mythological events or of allegoric iconographies far too complex to be understood by an alien. To assume that early cultures produced only simple depictive iconographies whose meaning is readily accessible to the uninitiated is not just akin to assuming that these were very simplistic societies, it contra-dicts what we know from ethnography (e.g. in Australia).

The literature on rock art is thickly littered with the pronouncements of scholars telling us which species are depicted in the alien iconography. They never mention what qualifies the inventers of these myths to make these pronouncements about an alien art whose age and cultural attribution remains elusive in most cases. The dating pronouncements they derive from their ‘identifications’ range from the plausible to the absurd. For instance, a Chinese scholar decided that some petroglyphs in the Helan Shan, Ningxia Hui, depict a group of giraffes, and since this is a Tertiary species in China he brazenly pronounced the rock art to date from the Tertiary. This may be an extreme example, but all similarly based dating claims are just as unsubstantiated, be they plausible or not. They have no scientific relevance, being based entirely on the visual perception of the observer, and his or her neural processing of phenomenal sensory input. In all humans, including archaeologists, this process is subjective – determined by the cultural, cognitive, religious, ontogenic and most particularly academic conditioning of the individual. They cannot therefore be tested by scientific means, as neither the interpreting subject nor the observer can analyse such claims in any meaningful way. If the subject believes that a marking on a rock depicts a human being with raised arms, he may impose his cultural conditioning over this perception and perceive an ‘adorant’. Having been conditioned by observations of similar rigour that ‘adorants’ belong to Bronze Age traditions, he will assume to know the approximate age of this motif. Another observer, conditioned differently, may well perceive a line figure of an animal seen in plan view. Or perhaps he also perceives it as an adorant but places it in the Neolithic. All the time it remains a mystery why apparently human figures with apparently raised arms are defined as ‘adorants’ (worshippers, supplicants). After all, we have no idea in which posture the people of the Neolithic, Bronze Age etc. worshipped, if indeed they did so. Clearly, modern observers have imposed their own values and mores on the mute evidence. It may sound trite or overly economical, but it is quite correct to say that most interpretational and age claims about Eurasian rock art are of this calibre.

The subjectivity of human perception, particularly vision, excludes from scientific consideration judgments about what alien art motifs depict. This is not to say that such ‘identifications’ are necessarily false, it simply means that they are not refutable, as they refer entirely to what happens within the neural and cortical systems of subjective intelligent organisms.

Additional problems with the dating of palaeoarts via iconographic ‘identifications’ by ‘experts’ concern the interpretational claims based on them. For instance, if animals or hunting scenes are said to be depicted, it is claimed that the culture in question was one of hunters-foragers-fishers. This is based on the proposition that each culture paints and engraves motifs illustrating its daily life. This belief seems to indicate that its followers either think that the rock art consists of messages to them (‘… and this, dear archaeologist, is how we lived …’), or at least that the cultures in question took their domestic life very serious. Few if any historically understood art traditions focus on domestically representative iconographies, yet it is assumed that in pre-Historic times this applied inevitably. The absurdity of this belief is well demonstrated by the extensive and iconographically complex Gwion art traditions of the Kimberley, Australia (formerly known as Bradshaw traditions). There are no hunting depictions evident in it, almost no apparent animal figures, and there is not a single known female figure. Yet we have no evidence that these rich traditions relate to an agricultural people, or to a population that lacked females.

In various cases it has been proposed, based on perceived hunting arts, that these traditions must be pre-Neolithic, e.g. in the Spanish Levant, the Sahara and central India. These pronouncements are not accepted today (e.g. Beltran 1982; Hernandez Perez et al. 1988; Muzzolini 1990), hence their basis was a false assumption about iconography in rock art. Similarly, rock art chronologies based on other iconographic identifications are likely to be wrong. Some, no doubt, will be shown to have been right, but this kind of hit-and-miss approach, based essentially on the reputation of the proposer, is not a reliable method of dating rock art. It does not form a legitimate part of rock art science, except as subsidiary information. An exception may be the few known instances of relatively recent rock art comprising very distinctive motif types of known chronological ranges, such as images of Tsagiglalal (Keyser 1990) or possibly some of the examples Carlson (1990) offers. In particular, this applies to imagery of ‘contact art’, such as that dating from the time of European settlement. Numerous examples have been reported from Australia (e.g. McCarthy 1967; Edwards 1971; McNickle 1991; Chaloupka 1993; Chippindale and Tacon 1998), southern Africa (e.g. Thackeray 1983; Vinnicombe 1976) and North America (e.g. Grant 1967; Schaafsma 1980; Keyser 1979, 1987, 1992).