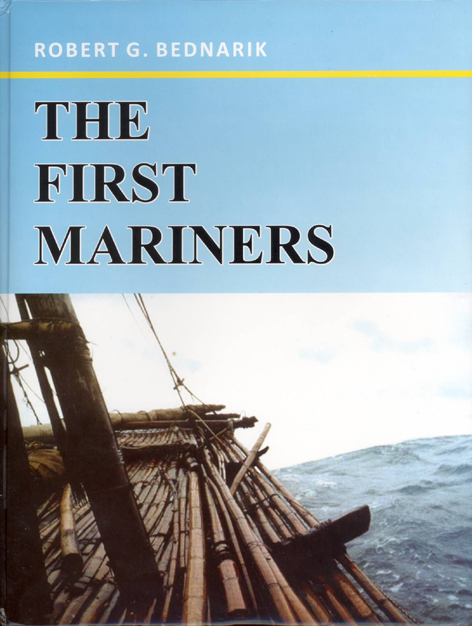 This volume summarises the history and findings of the First Mariners Project, which the author commenced in 1996 and which is engaged in exploring the Ice Age origins of seafaring. This is the largest archaeological replication project ever undertaken. It has so far involved many hundreds of people, the construction of eight primitive vessels with stone tools under scientifically controlled conditions, and the sailing of six of them. Four bamboo rafts have succeeded in accomplishing the historically documented crossings they sought to replicate, the other efforts have failed. One of the successful experiments, a 1000-km journey to Australia in 1998, attempted to recreate the first human arrival in Australia, probably around 60 000 years ago. Others addressed the much earlier sea crossings documented to have taken place in the islands of Indonesia, the earliest of which occurred up to a million years ago. Two of these experiments have featured in BBC productions, two others in National Geographic documentaries. This book describes the archaeological background and relevant issues comprehensively and it comprises an extensive pictorial record, of both the experiments and the archaeological basis of this research. It is unique in its approach, because in all such previous maritime adventures it has been tried to prove some point or other, usually that a certain crossing of the sea was possible. This project, by contrast, only deals with proven crossings for which archaeological information about their approximate timing is available. Its purpose therefore is not to prove any colonisation, but to establish what the minimum technological and cognitive conditions would have been to succeed in such maritime achievements of the very distant past. The book contains a detailed discussion of early palaeoart.

The publisher’s recommended retail price of this volume is US$150.00 (c. $A172.00). AURA has acquired a number of copies at cost price and is making these available to members at $A40.00 each (77% discount), plus postage for 1.8 kg weight. Please order your copy at AURA, P.O. Box 216, Caulfield South, VIC 3162, Australia, or auraweb@hotmail.com
We accept Visa and MasterCard.