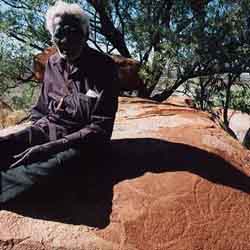 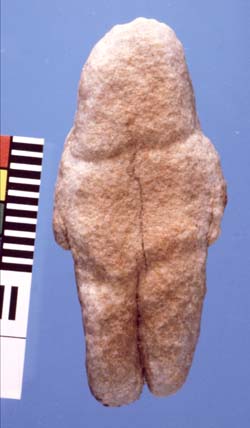 The quartzite figurine from Tan-Tan in Morocco, the earliest evidence of its kind, is estimated to be about 400 000 years old. 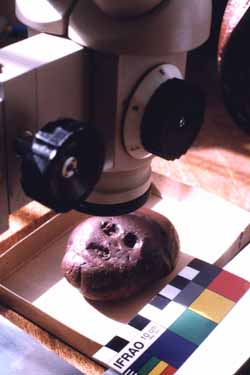 The jasperite cobble from Makapansgat in South Africa, at almost 3 million years the oldest known palaeoart find in the world, is an unmodified manuport.

Welcome to the AURA Homepage of COGNITIVE ARCHAEOLOGY

Cognitive archaeology is the branch of archaeology that investigates the development of human cognition. It therefore deals with a great variety of evidence, ranging from early rock art to other forms of palaeoart, from animal cognition to palaeoanthropology to psychology and ontogenic cognitive development, and it also needs to concern itself with evidence of early human technology and the ability of domesticating natural systems of energy. In short, this endeavour needs to draw its information from many disciplines. Its ultimate purpose is to consider how early humans managed to formulate their various constructs of reality, and how these may have led to the worldviews held by the human species today. Therefore human cognitive evolution is intimately connected to fundamental questions of epistemology: what were the processes that led to the way we experience the world today, that created the frameworks of reference humans use to map the physical reality they perceive to exist.

Cognition is not a capacity limited to humans, or to primates generally. Some levels of cognition can be detected widely in the animal kingdom. The human lineage seems to have split from the other primates around six million years ago. It gave rise to the family of australopithecines that roamed Africa for several million years. Finally, we can detect archaeological evidence that humans towards the end of the Ice Ages were physically, mentally and probably cognitively indistinguishable from ourselves. So human cognitive evolution occurred essentially during the intervening time span.

It is generally accepted that there was no significant change in human cognitive ability since the end of the Pleistocene, the geological period ending 10 500 years ago. Therefore the archaeology of the current geological period, the Holocene, is probably of limited interest to cognitive archaeology. We can also say that at the beginning of the Pleistocene period, some 1.8 million years ago, the hominids then living possessed cognitive abilities that were very probably much less developed than those of modern humans. It therefore stands to reason that cognitive archaeology is primarily concerned with the Pleistocene period: what were the circumstances that led to the development from a primitive hominid to an essentially modern human. The answer to this question is of profound importance to understanding the human being, and how it became what it is. Since the steep trajectory of our cognitive development is the feature that most distinguishes us from other mammals this is a quest of determining human origins.

Cognitive archaeology rejects the idea that palaeanthropology, the study of the skeletal remains of hominids, is central to the study of human origins. The bones of our earliest ancestors may tell us much about the physical evolution of humans. They tell us nothing about their humanness, in the same sense that the bones of any other animal cannot tell us about its culture, mating behaviour, courtship display or social systems.

The pages of this site present material that is of relevance to cognitive archaeology, as well as debates, news, discoveries and research data. This site is one of many forming AURANET, the Internet facility of the Australian Rock Art Research Association, Inc. (AURA). Besides visiting the pages listed below, please see us at AURANET to check out the many links to related sites.

Art, perception and information processing: an evolutionary perspective, a substantial research article by DEREK HODGSON with comments by several scholars.

The earliest evidence of palaeoart, a research article by ROBERT G. BEDNARIK with comments by twelve scholars. This is a PDF file of 912 KB.

On the cognitive developments of hominids, a paper by ROBERT G. BEDNARIK. This is a PDF file of 376 KB.

The Lower and Middle Palaeolithic origins of semiotics by R. G. Bednarik (2006).

Before opening a PDF file (see links below) you may need to open your Adobe Acrobat Reader. If you do not have the Acrobat Reader please click here for a free download of the latest version.